"I have moved over 2,700 greyhounds to adoption by working with 15+ farmers in Abilene and countless adoption groups." 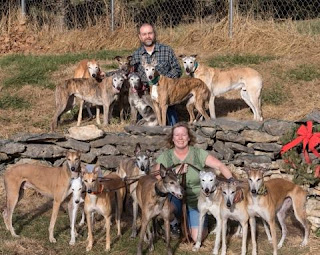 In 1993, I was a young college student looking for a summer job. My sister's boyfriend (now husband) worked at the Woodlands as a security guard, and he knew I loved animals and said why don't I put my info up in the guard shack? So I did. Ironically, that did not lead to a job at the track, but an assistant job with Robert Gillette who owned greys and had his own veterinary practice. I took over care of his 12 greyhound farm and worked at his clinic also. Since I still didn't really know what I wanted to do with my life, this was a very formative time for me. But the greyhounds spoke to me. When he didn't feel like he had enough work for me, he hooked me up with Harvey Brown a trainer at the Woodlands, where I started as a helper and worked my way up to trainer.

I spent 15 years of my life training greyhounds and it was my favorite time of my whole life, and it solidified in me really quickly that I wanted to follow my dream and become a veterinarian. I was accepted into the KSU College of Veterinary Medicine class of 1999. And yes, I still worked at the track on breaks back home. When I graduated, I worked full time veterinary for a few years, then dropped to part time veterinary and part time greyhound assistant trainer. When the Woodlands closed in 2008, I cried, that big huge ugly cry, I felt like my life was over. I had Flying Robin in the last race ever run at the Woodlands, it was a Grade A (which she had no business being in, as she was only competitive as a C dog), but she came off smiling, helicopter tail wagging, so happy for her last place effort. The track had made a video of memories they played after that last race, celebrating the memories, and tears just streamed down my face unabashedly while I sat there hugging Robin.

After the Woodlands closed, I wanted to stay in the greyhound industry somehow, so I started a greyhound cancer study (which I am still doing, and will do for the remainder of my life). When Greyhound Support of Kansas City stopped placing the adoptables out of Abilene, I took over. I have owned a couple of racers of my own (though I was a much better trainer than I am an owner), and my husband and I chose not to have children, so we have 13 greyhound kids of our own at this time.

I knew nothing about greyhounds or greyhound racing when I started working with them. I learned very quickly that this breed is who they are because of everything they go through to be a racer. They stay with their littermates until they are a year of age, so they are way better socialized with other dogs than any other breed. They tend to go into the kennels at around a year of age, where they are taught to be lead broke and to be handled in all the ways they will need to be handled as a racer. And then they go through the various stages of training: from the jackalure to whirlygigging, to walking, to sprinting, to handslipping and boxing, each is a step toward becoming a racer, and even the ones that fail, are very well trained to become a pet.

I have now personally owned 46 greyhound pets that I have welcomed into my home. I couldn't tell you how many I have fostered personally. I have moved over 2,700 greyhounds to adoption by working with 15+ farmers in Abilene and countless adoption groups. I have taken in any sick greyhound off of my adoption list because I believe that every dog should know a home, whether it be for one day, one week or one month. Greyhounds are my everything and everything I do is for the greyhounds, and it always will be. And without greyhound racing, we have no greyhounds, at least, not the dogs we love.

Popular posts from this blog

"What I saw from the very first dog was not an abused, beaten, neglected animal."

June 21, 2018
Twenty-five years ago, my husband and I were walking in a flea market near our home on a bright sunny Saturday morning. We turned a corner to see a neighbor walking the most beautiful dog I had ever seen. He looked like a deer, trotting through the sunlight with a bouncy athletic step. As they drew close I’m sure I said something meaningless because at that moment he calmly turned his head and looked at me. I was absolutely transfixed. She explained that another neighbor was down the row outside, “giving away dogs to save them.” We went straight there to find the neighbor who I knew sometimes worked at the kennels in Florida. I had never been though and had no knowledge or experience with them. She told me to come in and meet King. To this day I regret not knowing his full name but he was a tall, handsome white-and-brindle male. She explained that she had come up for the weekend with a dog truck full of dogs that were going to be put to sleep but instead she had given them all awa
Post a Comment
Read more

"I saw happy, romping puppies and obviously well-cared for young adults in training dragging their humans to the farmer's training track for a schooling run."

June 19, 2018
I adopted my first Greyhound in 1994, and became an adoption volunteer shortly after that. This was before there was any Greyhound information available on the internet, and so my views about racing were based largely on what I had read in anti-racing literature or saw on sensationalized TV pieces. As a result, I was convinced that the Greyhounds were mistreated while racing and I was definitely anti-racing. When I adopted my second Greyhound about a year later, I found that she was as outgoing, sweet and easily handled as my first Greyhound. This didn't seem consistent with what I had been told about how Greyhounds were treated at the track. Both skeptical and curious by nature, I decided to look further into this seeming contradiction. I researched, as much as possible then, information about racing Greyhounds from all the "impartial" sources I could find. I found an address and phone number for a Greyhound breeder/farmer near Ocala, Florida and "cold called&q
Post a Comment
Read more